A nice King Mackerel aka, Kingfish was caught off Sanibel Island

Another beautiful day in the waters off Sanibel Island, Florida.  The wind has laid down and the Kingfish were hungry!! Big Bonita, snapper and gag grouper made an appearance as well. When the winds cooperate this is a great time of year for offshore fishing in SW Florida. This is the time of year when the tourist visitation is still light and the water is not overly crowded.  It can be an excellent time for a Sanibel Island fishing vacation considering the low chance of rain and weather still in the 80’s! 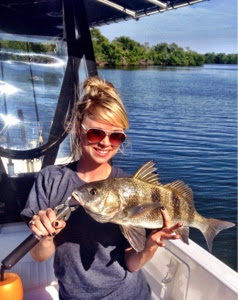 Carrie Vollmer visiting from Michigan got a chance to wrangle a few black drum and redfish today while enjoying this great weather.

November is a great month for fishing. Not only is the weather great here (sunny and 73 tomorrow) but some good eating species start to return. Mackerel, pompano, sheepshead, black drum and mangrove snapper are among some of the species that are great table fare that migrate here starting in October.

We hope you!ll be lucky enough to visit us in the fall when Sanibel and Fort Myers fishing is incomparable! 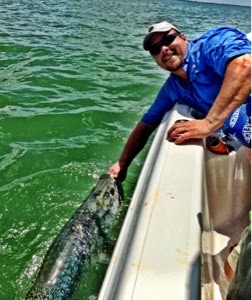 We are now about a third of the way into our Tarpon season here in SW Florida. Captains Bill and Matt have been doing their job and getting their customers on some big Silver Kings!

They’ve been mostly down south off Fort Myers Beach but are working their way up to Boca Grande where these 150 lb plus beauties com year after year.

The action has been good and really heating up as June is just around the corner! There are just a few slots left so don’t delay, book your tarpon charter today!

Today as we left the dock we notice a slight and I mean slight change in temperature. The rain for the last few days has subsided and the “cool” front has turned the redfish bite on in Pine Island sound.
Our charter started off right with 2 nice snook and a big jack and as the high tide started to flood the mangroves the redfish moved off the flats and headed for the tress. We had several nice slot size reds as well as a few oversize on our morning charter.

As fall approaches SW Florida large schools of Redfish will start pushing south though out Pine Island sound a make the flats and islands behind Sanibel and Captiva their home for the next few months until we see the first few cold fronts.

One of our latest videos for you to check out… enjoy!
Endless Summer Charters

Sanibel Tarpon fishing in May

They say that March comes in like a lion and out like a lamb. I would have to say the lion ate the lamb this year! We are still getting strong winds and here we are in May! The tarpon are slowly making their migration up the west coast of Florida to The craziness of Boca Grande Pass and beyond. We’ve had a few tarpon hook-ups despite the less than favorable weather conditions. Tarpon fishing offshore is about it right now if you want to get the Silver King.

As we begin December with mild temperatures and light winds, fishing in Pine Island sound has never been hotter. Redfish are still in abundance but we are seeing sizes getting smaller as the water temps start to fall.

his is the first December that trout have been open in many years and our clients have been limiting out each charter. Snapper and sheepshead also are making appearances and as we move into the colder months ahead we will see sizes increase.

Schools of pompano are getting more active on the flats around Sanibel but trout are still the most active in the sound. Nearshore, look for birds to show you the way to Mackerel and Bonito as the offshore bite will also start to heat up this month as well.

Have a very Merry Christmas and Happy Hanukkah!

Fishing in SW Florida for Redfish

As we move into the “dog days of Summer” and water temperatures start to rise, fishing for redfish in Pine Island sound is just what the doctor ordered, and the key to a successful day is tidal movement. As we get into the end of August the temperatures in the sound are nearing the 90s, find areas where the water moves faster look for small cuts between grass flats and oyster bars. Slow your baits down and make it a little easier target for the fish to catch. A trick I learned years ago is to trim the fins off of pin fish and float him under popping cork. This does two things slows the bait down and release and scent for the redfish to find. Fish the sand hole or “potholes” on the flats as well as oyster bars and I’m sure this technique will help you catch more reds. This technique will also get you hook ups with trout and small sharks that are cruising the flats looking for a easy meal. 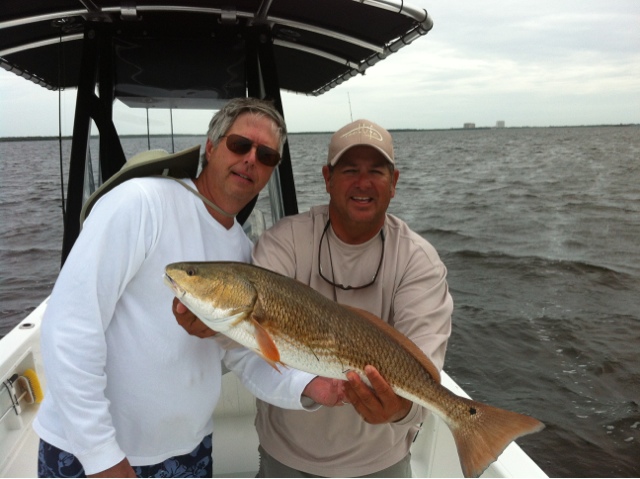 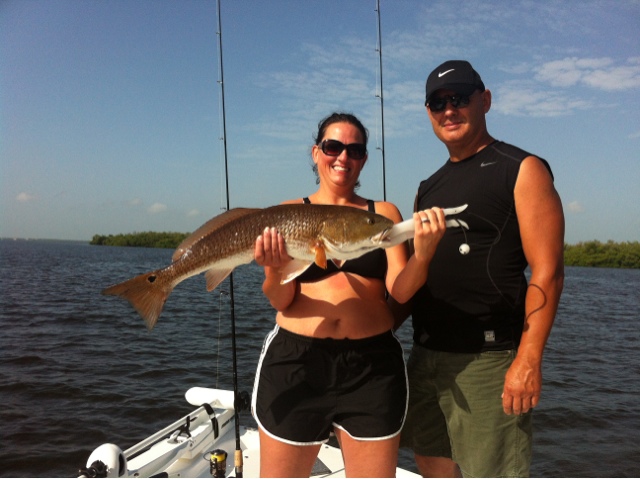 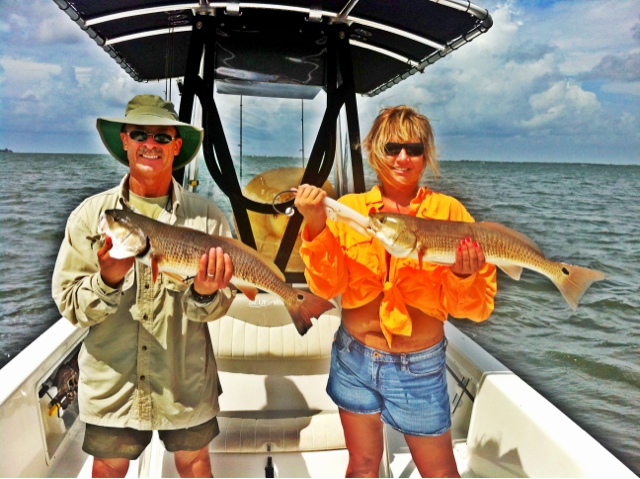 Now that the Tourist are Leaving…

Well, it’s that time again!  Time for the tourist and Snowbirds to start packing their bags and heading up North, right?  Well, yes but that’s not what I mean…

NOW is when the bite turns on for all the fish that have been tight lipped for the winter and start chewing on freshly caught bait!  Now is the time for the beautiful Silver King to make their way up through the Gulf of Mexico to feast on the bounty of S.W. Florida.  The Snowbirds are going home just in time.  I would say it would have to be bad timing but they’re leaving none the less.

Tarpon season is nearly here and just got word today that the tarpon are frolicking and having a good ‘ole time off Sanibel beaches while moving their way to Boca Grande Pass.  Ahhh, Boca Grande.  The mere utterance of the two words meaning “Big Mouth” conjure up the excitement felt when a kid is told he’s going to Disney World.  At least for me and a few thousand others.

If fly fishing is the Waltz then fishing for tarpon in Boca Grande is slam dancing.  Not that slamming is looked upon favorably but it happens.

Imagine 150 boats drifting over an area of two football fields in strong current trying NOT to bump into each other while tarpon are jumping, the yahoos that don’t know the rules are darting in and out messing up the drifts and you’re trying to keep an eye on the depth finder to find the exact right spot to let out more line or reel it up!  Whew!

I know what you are thinking… Yes, I’ve seen my share of fights in Boca Grande Pass (even been in a few) but they’re mostly verbal and add to the excitement of atmosphere of the pass.  People get real brave when they know their opponent can’t just walk over and knock them out!

I’ll tell you the worst thing I’ve seen in Boca Grande Pass while fishing for tarpon…  It just happened to be the day of the PTTS (Professional Tarpon Tournament Series).  There is so much adrenalyn, testosterone and just plain ego that you can feel it in the air.  The tension is brutal.  All these guys trying to make a name for themselves and get their mugs on TV is unreal.  I have to admit…it’s a blast!

Anyway, one of these guys jumps a tarpon.  By jumping I mean he hooks a tarpon good enough where the tarpon flies out of the air like a basketball player making a lay up.  At the same time an amature hooks up on a nice tarpon from the same pod.  The professional holds tight as the tarpon weaves it’s way through the boats.  It’s a fight just trying to not let your line get cut on another boats propeller.  That’s part of it though.  The obstical course of Boca Grande adds to the excitement of the catch and makes winning a tournament all that more sweet.  At least I thought.

As the ego driven angler with a testosterone driven captain crosses lines with the female angler in the amature’s boat (Now, they have the right to be there just as much as the professional tarpon angler does) I watched as the captain came out from behind the helm with what looked like a filet knife.  It happen so fast I didn’t have the time to think about why he left the helm.  In a split second the line from the lady angler was cut!  Sure it was in the way..but no more than they were in the way of the lady angler!  You might as well had cut her heart out.  Boy, was she steamed and I don’t blame her. She was seen complaining to the officials later.  Sadly, it did no good.

I have to admit there was $100,000 on the line and that changes things for some.  Oh, I guess I should add greed to the list of things you could feel in Boca Grande pass that day.

Come visit us during “Bite” season and not just Snowbird season.  I’ll be your guide through all the frenzy and you’ll have the time of your life!